Periodically, and tonight was one of those times, I search online for the survivors of the 1997 Cyclone Martin which devastated Manihiki. I lived in Manihiki in 1991 and I have thought about

the people there many times over the years. I was twenty-five and likely impressionable, but the people have stayed with me all these years. I often wonder how my students are doing and where they are now.

Horrifyingly, I only found out about the cyclone because I was searching for the principal of the school where I volunteer taught for a few months. I found instead a story about her harrowing escape when she was washed out to sea. They survived largely due to her, her husband and a neighbour’s survival tactics. They were swept into the lagoon and then across the three mile lagoon and into the ocean. During that time they lost their hold on their children, which is a terrible thing to read about. The night I first encountered the story I spent hours trying to find out if the children I knew and loved were still alive but it was not an easy search.

Even now, a few years after I initially heard about the disaster, I looked again. I can’t help but wonder how the people I knew so long ago, now over twenty years ago, endured not just the cyclone and the aftermath and cleanup, but the changes 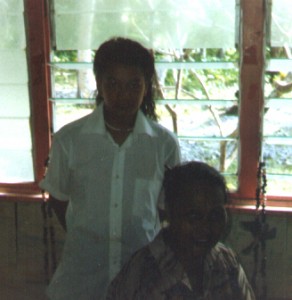 brought to their society over the years. I’m guessing the teacher who was my friend, Api Dan, has likely died, since she was in her sixties then, but I wonder about her niece, my student.

As we get older and people pass in and out of our lives it is natural that we should forget some of them, but there are also others who have a deep hold on us. I wonder about friends who I was close to that disappeared in other ways, but I can’t help but remember this tiny isolated island and the people on it who so long ago now opened their homes to a strange foreigner.

I had an English teacher in high school many years ago who talked about writing as something that people do, rather than something that died with Shakespeare. I began writing soon after, maudlin poetry followed by short prose pieces, but finally, after years of academic training, I learned something about the magic of the manipulated word.
View all posts by Barry Pomeroy →
This entry was posted in Travel and tagged Cook Islands, Manihiki. Bookmark the permalink.

2 Responses to Cyclone Martin and Manihiki