I have commented before on hostile architecture in Winnipeg, but now that I have collected a few more examples, I thought I would share what we walk by every day and ignore. Perhaps our own privilege blinds us. For if we are not waiting for a bus of killing time in Portage Place mall, then public seating does not affect us. Or, we may have accepted the deliberately uncomfortable seating as a necessary evil in a city where so many people are poor. We may also be oblivious because the landscape undermining our comfort and pleasure is the background tableau against which we live our lives. 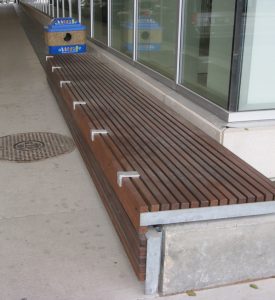 I have already pointed out metalwork on benches so that people cannot run their skateboards along the edge. These benches share those features. 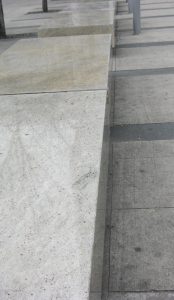 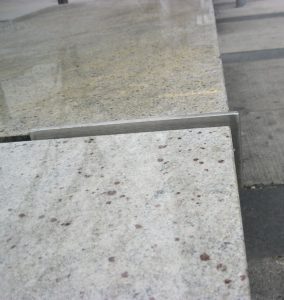 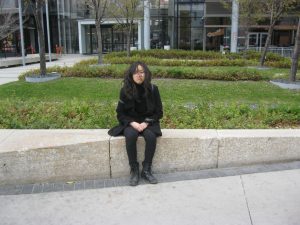 decorative rock ledge or bench, or divider, is similarly built so that no one waiting at the bus stop can take advantage of a place to sit once the bus shack seats are filled. 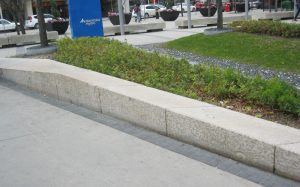 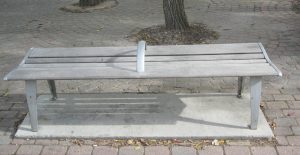 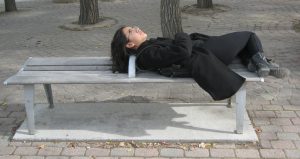 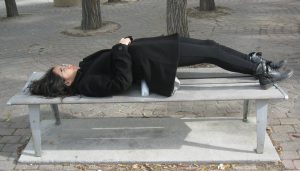 noted before, benches are also built so that no one can lay on them and rest. Here my model gives it a try. 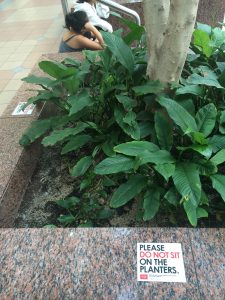 damningly, the signs in Portage Place mall indicate that no one is allowed to sit on the wide stone walls of the planters. This ruling was not always in place, but has been added more recently. The security guards do their utmost to protect the sanctity of the benches, even while they refuse to chase a thief in the mall. As you can see by the picture, if they want to rest, the customers to the mall must sit on the steps which are dirty from people’s shoes so that they follow the arbitrary rule. Oddly, the planter surrounds are obviously designed for sitting, but the ruling must have come along more recently. 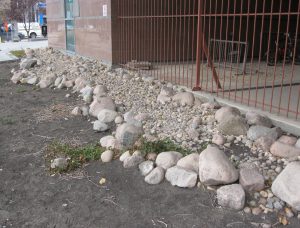 uncomfortable surroundings to buildings so that the homeless cannot lean or sit against them. These boulders both answer that function and remain decorative. 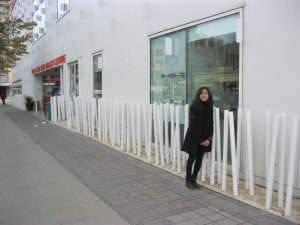 sand-filled tubes along the side of the University of Winnipeg Buhler building is not nearly as attractive or pastoral. Instead, it looks like exactly what it is, the same type of spikes used to keep pigeons 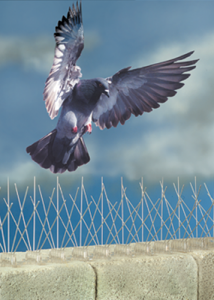 from roosting on cornices.

Just in case we thought people were not able to fight against this movement, public space continues to be marked upon by the public heel. Much as trees will develop bumps on leaves to dissuade and trick moths laying eggs, the public is one step ahead of the city planner who tries to make the city as uncomfortable as possible for the most marginalized of its citizens. These cyclists are fighting back by using the wall itself as a jump. 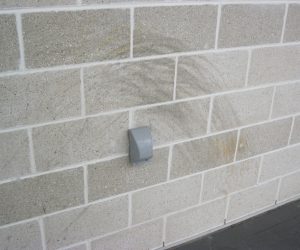 Soon the building will build something to prevent that, but by that time the cyclist will have moved on to greener pastures, one step ahead of the planners, and more knowledgeable about the purpose of public space.

I had an English teacher in high school many years ago who talked about writing as something that people do, rather than something that died with Shakespeare. I began writing soon after, maudlin poetry followed by short prose pieces, but finally, after years of academic training, I learned something about the magic of the manipulated word.
View all posts by Barry Pomeroy →
This entry was posted in Activism, Art, Winnipeg and tagged hostile architecture, Winnipeg. Bookmark the permalink.

One Response to Hostile Architecture 2