I never cook with a recipe, although I occasionally record what ingredients I have combined 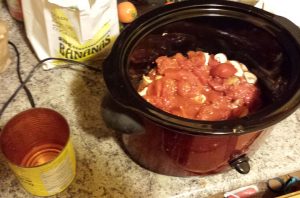 to make a dish. More often, I have no idea what it will taste like until it’s done, and by then I have moved on to the next project. I’m never even sure that I can duplicate the taste, remember each ingredient and their order.

The Thai red curry pumpkin is an easier dish to make in some ways, for it is made in a crock pot. That means the ingredients are put in without a cooking order and then cooked for a few hours. I took photos of my cooking in order to remember the venture this time, and so I am ready with a recipe of sorts.

1.5 cup of fresh mushrooms
1 cup of onions
3 cups of pumpkin 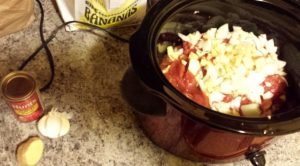 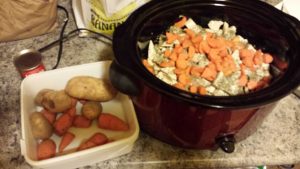 The point of using the 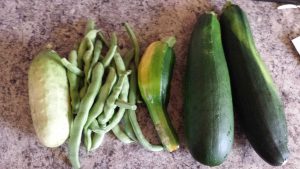 pumpkin is obvious to anyone who has been following my Instagram life this summer. I wasn’t sure if I was going to leave the city all summer, so on the chance that I was, I dug up the yard and planted pumpkin, spaghetti squash, carrots, green beans, potatoes, rhubarb, raspberries, swiss chard, kale, spinach, lettuce, tomatoes, lemon basil, and chick peas. I have several large pumpkins left over from a crop 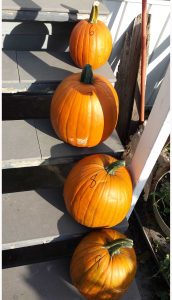 of fourteen, although I have nearly eaten—in three cases given away—the sixteen squash. Because of this cornucopia, I have been making squash bread and pumpkin apple crumble, although that is a story for another time.

In this recipe, the potatoes, 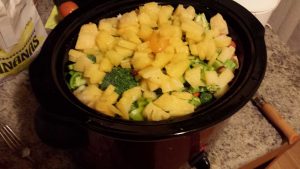 carrots, pumpkin, and green tomatoes came from my garden. I piled it all in the slow cooker, added some fluids, and waited at least five hours. It took some time for the cooker to bring the food up to temperature, but once it did, and it was nearly done—which can be identified by the delicious smell of cooking food in the house—I unplugged the cooker and went to bed. By the next morning, everything was cooked and the pot was still slightly warm. That is more of a testament to the amount of food and the well-insulated pot than it is to how warm my house is.

I had an English teacher in high school many years ago who talked about writing as something that people do, rather than something that died with Shakespeare. I began writing soon after, maudlin poetry followed by short prose pieces, but finally, after years of academic training, I learned something about the magic of the manipulated word.
View all posts by Barry Pomeroy →
This entry was posted in Gardening, Health, recipes, Self-reliance and tagged Pumpkin curry, recipe, Thai red curry. Bookmark the permalink.