In the west we are taught to be fastidious about eating with our hands, and in fact, we want our hands to be as far from our food as possible. We make exceptions, of course, finger food at luncheons and ethnic restaurants where we uncomfortably try to enter in the spirit of the cross cultural experience.

Like any cultural decision, avoiding the natural mouth and hand connection comes at a price. Many will think first of the agonizing training of children, the slapping of the fingers that venture toward the plate, the howls of disgust when, using their more efficient and tiny hands, they scoop up food items that were better—we are told—balanced on a spoon or chased about the plate with chopsticks. You might also think of the germaphobe’s retreat from chapattis made by hand, from salad tossing assisted with fingers, or even licking the bowl after the cake batter has been spooned into the cake pan.

The price, in fact, is ease. As anyone who has moved into an empty apartment could tell you, their one utensil languishing somewhere behind a box, that our hands long since evolved to be the best way to get substance into our bodies. The veracity of this statement is being confirmed in many countries all around the world. When making my banana bread—look below for the recipe—I scoop flour out of the bag with my hands, grease the pan with margarine skimmed with my fingers in the container, squeegee the last of the batter into the pan with a decisive forefinger, and most disgusting, I am told, mash the soft bananas by squishing them with my hands, letting the tortured banana bits worm their way from between my fingers into the batter. I mix the dry ingredients of the apple crumble with my hands, squeezing the flour and sugar and oil mix until I feel it is ready, and I tear apart a pumpkin pie with my hands, since our stomach cares little for the straight lines of the case knife.

Once I even cut my finger as I was preparing a stir-fry and kept cutting the green pepper while blood turned the pepper red. That may have been going a bit far. 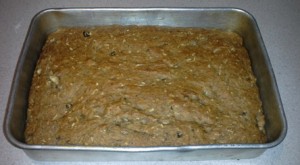 Bake at 350 until you can stick a knife in it that emerges cleaner than it went in.

I had an English teacher in high school many years ago who talked about writing as something that people do, rather than something that died with Shakespeare. I began writing soon after, maudlin poetry followed by short prose pieces, but finally, after years of academic training, I learned something about the magic of the manipulated word.
View all posts by Barry Pomeroy →
This entry was posted in recipes and tagged Cooking, Eating with your hands, No Egg Banana Bread. Bookmark the permalink.