Why People Believe in Gods: Coincidence and the Workings of Chance

When I was driving east with my friend this summer, we began to have car problems. Such problems, as you know if you have experienced them, nearly always occur late in the evening and on a Saturday evening. As if to ensure the maximum amount of down time as well as the scarcity of open garages, they also tend to happen in remote areas.

In our case, the battery light—which 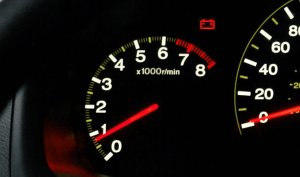 typically indicates a problem with the alternator—came on while I was driving. My friend was sleeping at the time, and when she woke, she never thought to mention the light to me. The check engine light has long been a constant reminder on my dash and to the colour-visioned, the idea that I wouldn’t notice a red light on a bright day is difficult to remember. By the time she mentioned it to me, some twenty minutes had passed.

We kept driving while I pondered

the implications of where we were, east of Sault Ste. Marie, and what towns might lay ahead of us. She scoured the internet for towns and I pulled over to disconnect the headlights. Even though it was growing darker in the evening, they were drawing too much power from the battery.

Espanola—which oddly is near Spanish—and began to look up what businesses were available. I didn’t remember much about the town, and wanted to ensure it had a large enough population to support garages that would be open on Sunday. We pulled into town, and got a room at the overpriced rundown Goodman’s hotel which was beside the highway. I mostly chose that one so that I could use the small hill outside the front door to get my car started in the morning, although once we were settled in I wished I would have spent more time looking at others.

I used the evening and the hotel Wi-Fi to research installing an alternator, and what options the town might provide the following day and slept uneasily as I winnowed through possibilities depending on what happened the next morning. Once we jumped the car on the hill and drove to the Canadian Tire store—which luckily was open on a Sunday—we found they didn’t have an alternator which would fit my car, if it was even that possible to install it on the roadside using my regular travel toolkit. The alternator in my Civic is located behind the engine and is flanked by the engine, firewall, master brake cylinder, suspension and drive train. It is famously difficult to replace. As well, I remembered removing alternators before and the through bolt on the base of the device were always a nightmare to shift from its sleeve.

I had planned for the warehouse’s small stock options, so I bought a car battery instead. My battery was old when I bought the car and I’d had it for seven years. It was already showing signs of weakening, and running the car from the battery for over an hour the day before would not help. As well, relying on two batteries meant that we could likely keep the car going for many kilometres without having to worry about it dying on the side of the road.

While buying the battery, I asked 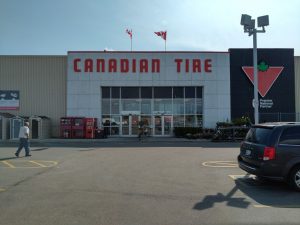 and found out that the Canadian Tire would charge our old battery for free. Therefore, while we sat outside the Tim Horton’s and my friend drank her coffee, our battery was being topped off and we were able to get back on the highway with two fully charged batteries.

Once we were in Sudbury, we had a decision to make. We bought an alternator that would fit my car, but there were few places open on the Sunday. With two batteries and an alternator to busy myself if we died on the side of the road and

I felt up for trying to replace the dead one, I suggested that we might be able to get to Ottawa, where I could use my friend’s garage and install the alternator myself. As much as I wasn’t looking forward to the job, I am more confident about my bumbling attempts than the rough and ready work of mechanics along the road.

My friend was up for it, so with our batteries charged at the Canadian Tire, we left for Ottawa, some five hundred kilometres distant. That took us as far as North Bay, where we charged the old battery again, and swapped it with the new one. If any battery were going to be run completely dead, I wanted it to be the old one. A discharged battery has a difficult time recovering, and that can even ruin the battery. 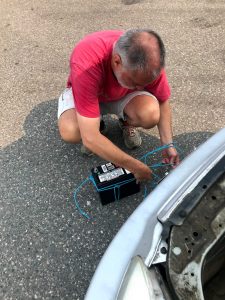 hotter, and by late in the afternoon we swapped batteries again. By then a thunderstorm was threatening and it was growing dark. My lights were still disconnected, and I knew the wipers would take away what little power we had in the remaining battery, so while the raindrops were falling, I had my friend look up the address of someone I knew in Deep River. I had called her a week earlier to explain that we had little time and I would not be visiting like I sometimes would, and therefore she knew we would be in the area.

The next morning we took her advice and charged the battery at the garage she used regularly. While the mechanic took twenty minutes to tell me how he was so busy he couldn’t take the time to install my new alternator, the battery charged in the background. When he was finally ready to turn to his work, we walked downtown to the waterfront and wandered around the shops. When we returned, I put in the old battery, keeping the new one in reserve, and we set out to drive the last two hundred kilometres to Ottawa. The old battery worked well until the day became too hot. Then we had to swap out batteries because the radiator fan was coming on too often and draining power.

We were on the new battery and the car was beginning to falter while we were still a hundred kilometres from the city. As it misfired and sputtered, I left the highway at Goshen road, just before Arnprior. We drove down that road a kilometre or so, until I felt we were getting too far from the highway. Then we picked a wide driveway to park in the shade and let the car cool down. I lifted the hood and splashed water on the radiator but when I tried to start the car the battery would barely turn over the starter.

At about this time an older woman on her way to town exited the driveway. She stopped to ask if we needed help, and then told us that her son was a mechanic and he was home. Although a religious person would have thanked their gods for such good fortune, we walked up the driveway and talked to the man who agreed to install the battery. He wanted to bring my car into the yard with the forklift, but I would rather peer through the crack between the hood and the engine than risk damage to my undercarriage and exhaust with a poorly placed forklift. I borrowed a jumper pack and set it up on the windscreen while I drove into the yard with the hood up.

Once he started to work 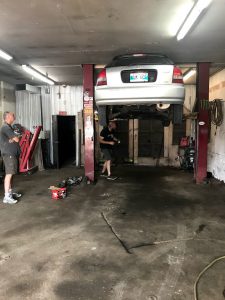 I began to appreciate how great a mechanic we had happened upon, and how difficult the job was. He used his acetylene torch and impact hammer on stubborn bolts, and removed the master cylinder to gain access to the alternator berth. Once he was finished, over an hour later, he suggested forty dollars for his time. That was much below what would normally be charged, and places in the city would have asked for over a hundred. I think he was responding to my old clothes, the old car, and our eagerness to get to Ottawa where I could do the job myself.  I gave him seventy, much to his surprise, and we were on our way again.

This seems like a longwinded way of talking about why some people would ascribe to gods what I would read as coincidence, but the background about the various car problems shows that the gods were nowhere to be seen when I was trying to find an open garage, a parts store which had an 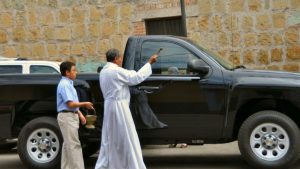 alternator for us, and a cooler day which would have meant we could have driven into Ottawa. Instead, the one striking coincidence was the mechanic right where and when we needed one.

Even that was not so much kismet as logic. He told me that people often break down at the entrance to his drive, and when I thought about how I had picked it, based on its width and careful maintenance, I wasn’t as surprised. Because he uses heavy equipment, he requires a wide driveway, and that is inviting when a car is dying. As well, although he is not right beside the highway, he is close enough that anyone who left the main road so they wouldn’t block traffic while 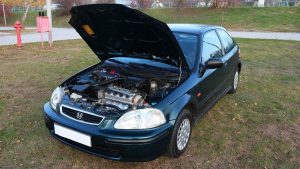 pondering what was wrong with their vehicle, would find themselves not wanting to go too far into the hinterland.

For the one element in my story that went well, there were dozens that could have gone better, and although it is tempting to ascribe agency to the intemperate hand of fate, I think the notion that the gods play dice with human lives, rather like the Norse or Greek gods, likely better describes our experiences than the anxious mothering figure 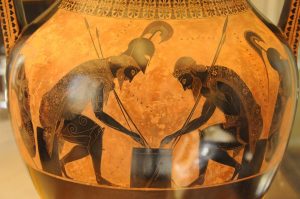 manipulating physical reality so that our lives might be easier. The god who plans ahead, sets up a mechanic at exactly the right spot in order that I might find one, is the same god who removed that mechanic from a thousand other drivers. He wasn’t where he needed to be, but instead, luckily, he was where we needed him, and given his willingness to help, and generosity, I’m sure he is where many others will call upon his help as well. We don’t need a capricious god to explain that, any more than we need one to explain the other elements of the car’s deterioration.

I had an English teacher in high school many years ago who talked about writing as something that people do, rather than something that died with Shakespeare. I began writing soon after, maudlin poetry followed by short prose pieces, but finally, after years of academic training, I learned something about the magic of the manipulated word.
View all posts by Barry Pomeroy →
This entry was posted in Culture, Religion, Superstition and tagged breakdowns, car maintenance, logic and coincidence, prayer. Bookmark the permalink.