Fiddleheads in the Spring 2019

Traditionally, one of the earliest foods of the season for Indigenous people in New Brunswick was fiddleheads. 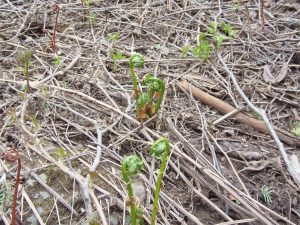 They are the first green which appears and are high in vitamin C. Therefore, they are an excellent supplement to a diet which has been missing greens over the long winter. Fiddleheads have also become a valuable green for me on the land. When nearly everything else is still contemplating whether it wants to come above ground, fiddleheads are ready to push their heads up through the spring flooding along the stream. I picked two litres of them today, and then built a fire so I could cook half of them for dinner.

It’s been raining lately so the fire was reluctant, and the day was slightly chilly, but I am spent most of it either picking fiddleheads along the stream or digging up fresh earth for my greenhouse plants. I was hungry by the time the flames caught, and I was sitting close enough to the fire that I wasn’t cold. While I waited for the pot to boil, I threw small pine branches into the flames to both clean up the area around the fire pit and add to the fuel. By the time the fiddleheads were ready, I was gathering by bowl and fork,

and while the fire burned down to coals and a light rain came down, the results of my creeping through the bushes near the creek paid off. Even without seasoning, the fiddleheads were fresh tasting and crisp. I could have easily have picked enough to made an entire meal, and other than the chives growing beside the woodshed, they are the first food my land provides.

I had an English teacher in high school many years ago who talked about writing as something that people do, rather than something that died with Shakespeare. I began writing soon after, maudlin poetry followed by short prose pieces, but finally, after years of academic training, I learned something about the magic of the manipulated word.
View all posts by Barry Pomeroy →
This entry was posted in Writing. Bookmark the permalink.