Farley Mowat occupies a curious position in Canadian letters. He is a kind of Ernest Hemingway of the north, but in the academic world of English study, he is never dressed well enough to be invited to the party. Some might protest that he does not 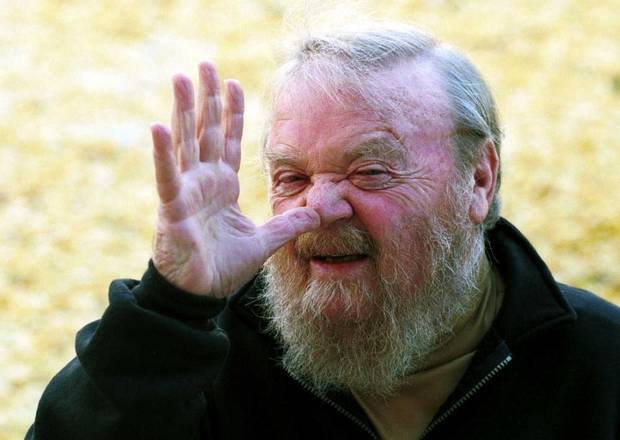 deserve to be at the same table where Margaret Atwood and Margaret Lawrence are sharing a cheese ball with Alice Munro, or Daphne Marlatt is into the wine with Leonard Cohen, where Timothy Findley and Robert Kroetsch are returning to the bar, and Fred Wah and Aritha van Herk are recruiting for the west. Others claim that the party is open to those more iconoclastic than Mowat, and they point to his credentials as the problem. The other writers are the grand old masters of the field, so goes the argument, and at such formal dress events, Mowat’s attempt at a tweed jacket with shoulder patches just wasn’t believable. Like Bert Archer suggests, “He looked like a mountain man, sounded like your rude brother-in-law from the sticks” (https://hazlitt.net/feature/how-we-failed-farley-mowat). Hardly the sort one would invite to fine dining. 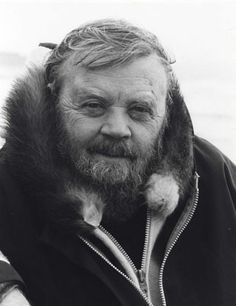 When I was young enough to assume the attitude of the academy, I internalized this argument enough to guess that Mowat’s prose was simplistic and his theorizing shallow. At that time I might have agreed with Professor Emeritus Sam Solecki in his statement about Mowat’s welcome at a formal dinner:

Mowat’s place and stature on university courses remained wonky throughout his career because his books were not easy to place in academic courses, His popular novels weren’t strong enough to stand by the side of MacLennan, Richler, Munro and their peers. (https://www.utoronto.ca/news/farley-mowat-canadian-storyteller-activist-and-icon)

Only upon rereading some of Mowat’s books as an adult, have I returned to the matter with more

questions than answers. Even though the relatively straightforward The Boat Who Wouldn’t Float and The Dog Who Wouldn’t Be had their roots in young adult writing, they were wittily written, clever in their execution, and captured as much of a moment in time as Margaret Laurence’s The Diviners and Margaret Atwood’s Surfacing, although he evaded their deep dive into the tribulations of the middle classes. His celebration of the natural world, or feelings of connection to things as much as the other

authors concentrated on relations with people, might have been estranging for that crowd, but his prose style was not less for the difference in direction.

I’ve been teaching at Canadian and American universities in Canada now for over twenty years, and I have yet to see Farley Mowat on the syllabus of any English literature course. Somehow, despite being as familiar and venerable a figure as Margaret Atwood, despite his many awards and translated texts, he escapes their notice. As his absence on syllabi became more obvious, and the blank looks when I asked about him became common enough to become significant, I went back through his texts mentally in order to see what might inspire such devotion in his audience and such subtle derision in his potential champions.

I think the academy sees his writing as too journalistic. In their collective mind he is a hack. His novelistic flourishes and literary craft are merely window dressing to sell what they would see as his latest pamphlet. A Whale for the Killing earned him the animosity of Newfoundland in general, and notoriety in Canada, but it was also scarcely calculated to engender the respect of the literary halls. He spoke about people as far from the literary journals as possible, with his working class heroes and underclass poverty. While the academy’s favourite writers were just beginning to dive into the personal narratives about family

and self that would make their career, from People of the Deer onwards he was celebrating and excoriating the world around him.

Like a good journalist, he carefully observed Canada’s north, animals, native people, Siberia, the coastal life of the Maritimes, archeological findings, and a dozen other passions, and although he wrote himself into his books, they were not primarily about him. They looked at a real world that he made fantastical. He brought obscurity into the light and obscured those elements which were already brightly lit.

Some critics have made much of his stated wish to “never let the facts get in the way of the truth,” and they point to the tenets of journalism he is ostensibly undermining. The public imagination has relatively limited tastes, however, and even if he looks for passion like a bearded Canadian version of Werner Herzog, it still fails to explain why his invitation to the party has always been lost. The writers feted by the academy—who are also a part of it since so many of them have

I think the main difficulty the academy has with Mowat has less to do with his journalistic writing, and his bending of the truth, but rather what he chose as his topics. He wrote about the poor, the dispossessed, the forgotten, and he did it without pretending that their life was his. He didn’t myopically examine the imagined poverty of the Canadian literary canon, but rather talked to the people at hand and found his narrative in their experience. He was a traveller, 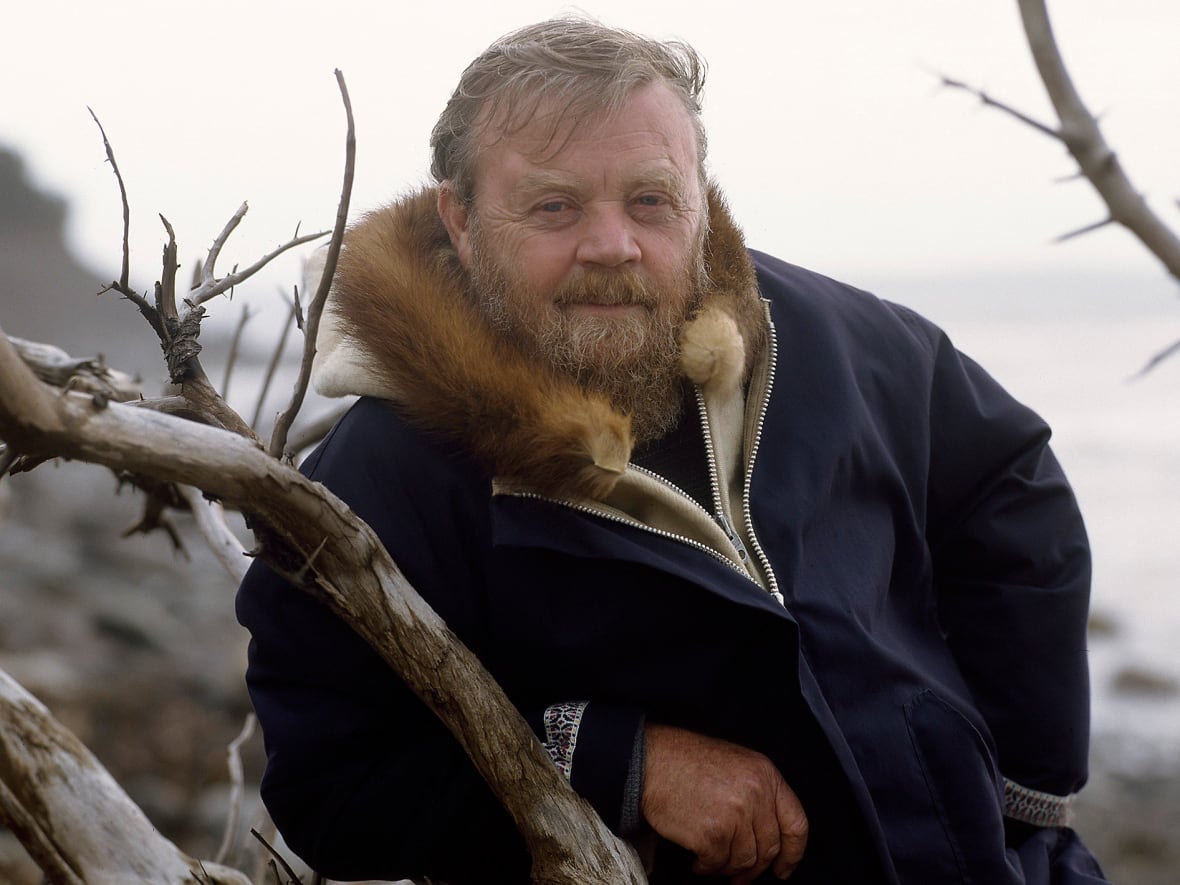 and more than the city authors cowering along the Canadian border cities of Toronto, Montreal, Halifax, Vancouver and Calgary, he ranged over land that others would require the Group of Seven to understand. He sailed off the eastern coast, and confronted eastern storms on the Atlantic just like the jackotars he imagined in Farfarer. In that speculative evocation of the past, he described the harbours along Greenland to support his case of former inhabitants, and walked around the Brochs on the two continents to guess at their builders.

Caught between the status of outsider artist like Henry Darger, Miroslav Tichý, and Vivian Maier and a journalistic fervour which drove him to expose Canada’s treatment of indigenous people, to tell the story of little known professions like tugboat captains and Dian Fossey’s work with mountain gorillas, he likely knew the wine and cheese were never for him. I would also guess, if we may use his significant contribution

to the Nova Scotia Nature Trust as an indication, that he might have torn the invitations as they arrived. He might have found flights between Toronto and Vancouver with hundreds of other academic literary writers tiring, even as he wished he was trailing behind a dog team on a thousand kilometre trek in what came to be Nunavut. Solecki claims that Mowat had chosen a different audience for his books, and “that his legacy will depend on the fate of those works that turned our attention north, to socio-political and environmental issues that are still with us” (https://www.utoronto.ca/news/farley-mowat-canadian-storyteller-activist-and-icon). People raised on the middle and upper class novels of manners of the southern cities would never have encountered the struggles of working people, or those of the Inuit in the far north of Mowat’s Canada.

If we return to the

party, it behooves us to carefully examine the self-contained Canadian writing community. Some of the older writers have become lecherous with inebriation, the younger ones fawning and flattering, and in between others belch over self-congratulatory praise and nepotism. The observant guest will remember to check on the staff. In between carrying drinks to the guests, cleaning up vomit in the bathroom, and stocking the bar, the next Farley Mowat is rumpling their staff uniform as they scribble during their break.

Afforded little time and boundless energy, a deep empathy for the impoverished and a delight in their stories, they will likely forget their duties to the wealthy guests. No doubt they will be fired by the very people who claim to celebrate new Canadian voices. If, like Mowat, they are undaunted, they will write what makes them a living, and strive to tell the stories which represent their own voice and that of others who have yet to be invited to the Canadian literary party.

I had an English teacher in high school many years ago who talked about writing as something that people do, rather than something that died with Shakespeare. I began writing soon after, maudlin poetry followed by short prose pieces, but finally, after years of academic training, I learned something about the magic of the manipulated word.
View all posts by Barry Pomeroy →
This entry was posted in Activism, Culture, Environmentalism, Literature, Writing and tagged Canadian Literature, Farley Mowat. Bookmark the permalink.