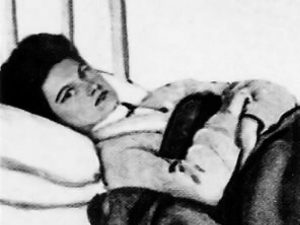 Typhoid Mary—a name she hated—is a peculiar one in the annals of public health. We had surely had carriers like her before, those who never suffered from an illness they inadvertently passed on, but she was the first case which was positively identified and who responded in such a selfish way. When family members where she worked died, Mary never considered that it might be due to her. She was the cook in several wealthy family kitchens, and as one after another grew sick, she moved from house to house. Perhaps she never put the epidemiological information together, although she knew enough to move once there was typhoid in the house. Once she was traced, and informed that she as an asymptomatic carrier, she refused to give samples 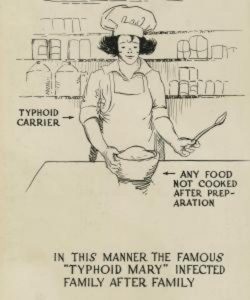 to authorities so they could confirm her disease carrying status. Eventually they arrested her as a public health threat, and although violently attempting to avoid capture, she eventually agreed to their dictates. After two years of experimentation and imprisonment she was told that she could never be involved in food preparation again.

She could have lived like that, or sought other jobs or training, but Mary felt she should be able to continue as a cook. She tried working as a laundress, but after an injury, and subsequent penury, she changed her name, which in the early 1900s was more easily done. She was

known in the upper class circuits, so she worked in restaurants and hotels. When outbreaks of typhoid occurred, she quickly left the job for another one. Therefore she became difficult to trace. When they finally incarcerated her, in 1915, it was a life sentence. Although the legal underpinning of the sentence was flimsy, Mary Mallon spent the rest of her life incarcerated in a small cottage where she was offered a job as a technician by one of the doctors. She died still incarcerated. 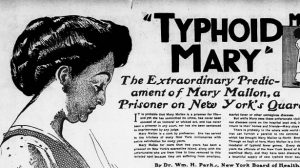 others over herself. Rather than protect the public, she refused both treatment and the admission that she was the carrier. She must have known on some level that she was to blame, considering that she was moving quickly enough after an outbreak, but she didn’t think anything should confine her movements.

I had an English teacher in high school many years ago who talked about writing as something that people do, rather than something that died with Shakespeare. I began writing soon after, maudlin poetry followed by short prose pieces, but finally, after years of academic training, I learned something about the magic of the manipulated word.
View all posts by Barry Pomeroy →
This entry was posted in Health, History and tagged Typhoid Mary. Bookmark the permalink.