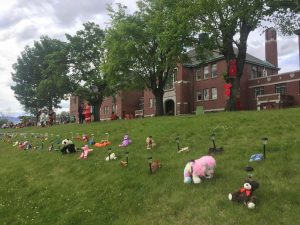 of 2021 brought a grisly history into the public eye. Although people had found bones on the site before, the use of ground penetrating radar went a long way to add colonial legitimacy to the first hand accounts from Indigenous people who were forced to attend the school as children. The radar signatures of a total of 200 corpses were found once the technology was 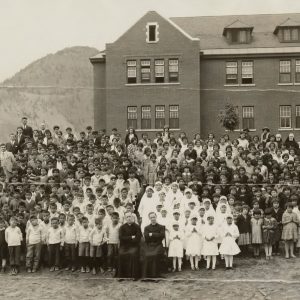 brought to bear, and Canada once again was asked to reconsider its commitment to the assimilation project, as well as revisit the horror of their attempt at cultural genocide.

Of course not everyone viewed the event as significant, but unlike similar discoveries at former residential schools, the Kamloops announcement created a media storm and a public interest that led to investigations at dozens of other former school sites and the reports of thousands of potential grave sites. The media frenzy even encouraged politicians to set aside their customary neglect and pay lip service to the findings of the Truth and Reconciliation Commission, or at least tweet about the discovery and their surprise. Not surprisingly, 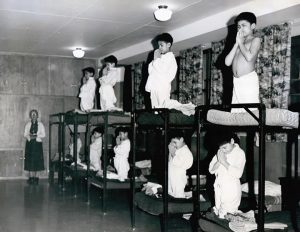 Canada demanded some action, and the government with all the alacrity of a colonial enterprise confronted with its depredations created a holiday to commemorate the Indigenous children who were lost. The first instance of that new commemoration, September 30, 2021, was a significant moment for Indigenous people in Canada. As such, it should have been attended by the Prime Minister. When the English queen died, the Prime Minister of Canada could not wait to attend the funeral. How much more could the deaths of thousands of children at the hands of a brutalizing colonial government would inspire him to take the day seriously? 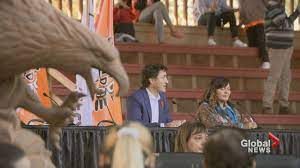 to honour their dead, but Justin Trudeau did not attend. Neither did he send his regrets and explain that he was ill, or that his child was home with the flu. He didn’t plead urgent tasks that needed his attention. Instead, in a gesture which was widely interpreted to be a slap in the face, he flew to western Canada, and 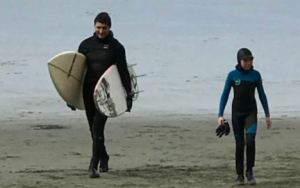 visited the popular resort town, Tofino, BC, and went surfing while residential school survivors mourned. This choice was widely regarded to be at best callous.

There is precedent for this staged neglect, however. When the Nishiyuu Walkers trudged through the winter from northern Ontario and arrived in Ottawa on 25 March 2013 to meet with then Prime Minister Steven Harper, he wasn’t on hand to greet them. Much to their dismay, he 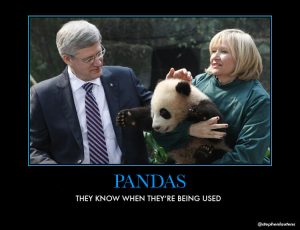 decided that his attention was better devoted to the arrival of two panda bears arriving at the Toronto Zoo. He made a speech celebrating the new agreement between China and Canada regarding the bears, and proclaimed how such a process fosters peace and understanding. This was a deliberate snub. Not bothering to greet the representatives of the Cree who were months traveling to meet with him proclaimed to his corporate base that he would not honour treaties or any agreements between Indigenous people and the government.

Despite how they might at first appear, neither Harper nor Trudeau’s dismissal of Indigenous people’s concerns are casual acts of microaggression. They are both deliberate and public gestures. Although I do not pretend to know what behind-the-scenes shenanigans would lead a public figure to so stain their legacy by an act of deliberate cruelty—what corporate masters they have to answer to who would fear a sudden flurry of land claims in the wake of any sense that the government cared about the concerns of Indigenous people—the 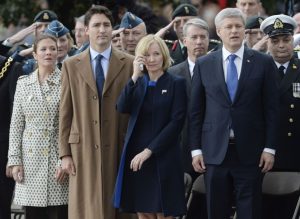 facts of the matter remain. Instead of privately make their disdain known by pretending to be busy, instead of covering their disregard with pleasant lies about sudden responsibilities, both recent Prime Ministers chose to make it known to the Indigenous people—and more importantly, their colonial voters—what side they were on. They wanted to ensure that everyone knew that they would not cater to the requests of Indigenous people, regardless of how mild, and that on the contrary, their actions paint a portrait of arrogance and disrespect that speak more clearly than the insincere apologetic flourishes that would have been incorporated into their speeches on the subject.

Although Trudeau largely ran on the platform that his party’s relationship with Indigenous people would be strikingly different than Harper, for the Indigenous people of Canada, the distinctions are difficult to discern. He has made pretty sounds with his mouth, promised much and delivered little, and in that way has earned his spot in the endless parade of rich white men who have continued with business as usual in colonized Canada.

public policy, and as far as anyone can tell, the colonial legacy of Canada is still grinding up the bodies of those the country is founded upon. This past Truth and Reconciliation day, September 30, 2022, Trudeau was eager to recover from past mistakes. The message had been sent, and it was now time to soften the blow with words. 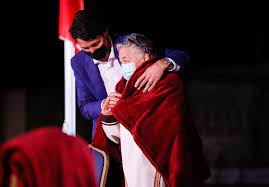 action looks like in Canada: “On this day, which is also known as Orange Shirt Day, I invite everyone to listen to Survivors and learn more about the history and legacy of the residential school system by participating in a local event or wearing an orange shirt.”

Luckily for the colonials, he is not asking for Canadian citizens to do anything significant. If they but wear a shirt or attend a local event, they have done enough. The Manitoba Conservative Party agrees, even while they are actively planning to remove the statutory holiday status of Truth and Reconciliation day, they pose in the orange shirts 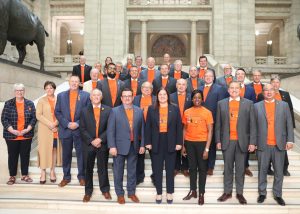 of their commitment to fashion if not respect.

I had an English teacher in high school many years ago who talked about writing as something that people do, rather than something that died with Shakespeare. I began writing soon after, maudlin poetry followed by short prose pieces, but finally, after years of academic training, I learned something about the magic of the manipulated word.
View all posts by Barry Pomeroy →
This entry was posted in Activism, Culture, History, Winnipeg and tagged Indigenous people, Justin Trudeau, manitoba conservative party, racism, Steven Harper, Truth and Reconciliation Commission. Bookmark the permalink.