If I were writing an elegy, 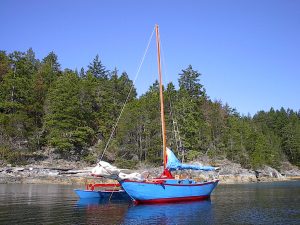 I would say that the voyage has been a difficult one. I readied the boat, took down sails in the storms, and dropped anchor when arriving in the calm waters of the port.

Unfortunately, the sea has always been intemperate, and a squall has hovered on the horizon for many years. By times that has blown into a gale, but more often the wind dropped, and cloud cover prevented the use of a sextant. Lost with only a compass, 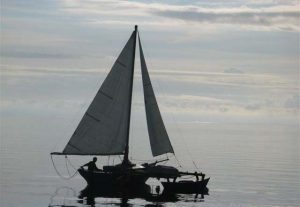 I languished in the doldrums, patiently waiting for a catspaw of wind.

I now think it’s time to start the motor and go to shore. The boat is leaking, the sails are ripped, and I am running out of provisions. 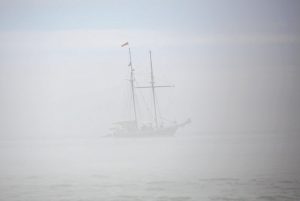 I have seen through the fog has proven to be a mirage, and the green hills of pleasant valleys beckon like Crusoe’s footprint in the sand.

In the end, after the voyage is over, all we have left are the stories we tell about it.

I had an English teacher in high school many years ago who talked about writing as something that people do, rather than something that died with Shakespeare. I began writing soon after, maudlin poetry followed by short prose pieces, but finally, after years of academic training, I learned something about the magic of the manipulated word.
View all posts by Barry Pomeroy →
This entry was posted in Travel and tagged ghost ship, relationships, sailing. Bookmark the permalink.