I’d been visiting Silvio’s family in Argentina for a month by the time we drove to the mountains to visit his cousin. His cousin was renowned for her avarice and unmannered lack of civility, and so when Christmas Eve approached, 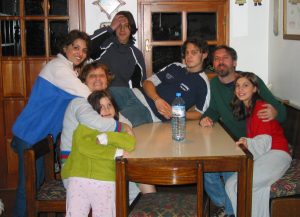 which heralded the entire family coming to visit, she took Silvio aside and asked him to send me away. “He’s not really family,” she complained. When Silvio asked what he was supposed to do with me, she recommended dropping me off at a hotel.

Silvio never told me what was happening, but his mood was obvious. “We’re leaving. Pack.”

I packed up my bag while he took his downstairs and then an argument in rapid Spanish ensured. The kids looked concerned by the mayhem, but even though I was getting a sense that the cousin had some problem with Silvio, I hid behind my lack of Spanish and sat at the table while they argued. When it came time to leave, I made sure to thank the cousin for opening her home and being so hospitable. I didn’t know what the problem was, but I sensed it had to do with her hospitality.

It was a relief when we finally left, and Silvio bade me drive. He was too angry to deal with traffic. I asked him what had happened, but he waved my entreaties away. We went to a restaurant for breakfast since we hadn’t eaten yet, and as he calmed down and the food arrived, he told me what his cousin had said. I told him I was willing to go to a hotel. “You’re family,” he said. “And she’s gone too far this time. We’re going back to Neuquén.” 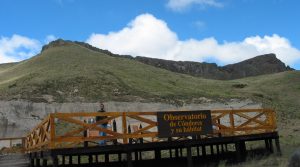 I drove into the mountains while Silvio napped and by the time we were at high altitude and had stopped at a lookout for condors, he was calmer. We talked about the incident all the way home, and he told me his father would be as angry as him.

He was right. As soon as we got back we had a big family conference. Although I didn’t realize the import of the entire event, everyone in the family apologized to me over and over. His father announced that I was Silvio’s family when he was in Winnipeg and therefore I was their family when I was in Argentina. The general consensus was that the selfish cousin had gone too far. The father called her and said he would not be coming for Christmas. He wrapped it in a story about a long drive and feeling tired from work, but this was more than a regular slight. Without the patriarch, no one else would come.

The cousin freaked out. Juan Carlos had been very generous with her and now she’d upset him. She immediately sent for her brother to drive her the four hundred kilometres along the route we had just fled. Once we heard that, we both decided to leave the house. Neither Silvio nor I wanted to hear the false apology from the cousin who had just realized that the father’s money might not come her way anymore.

Like refugees, we went to Marcela’s place, in my case, and Silvio went to Viviana’s. Those friends of the family were apprised of the situation, assured me that Silvio was right 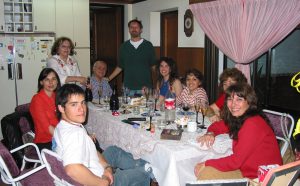 about the rudeness, and took us in for the two days the cousin was in town. Reportedly the cousin tried to talk to the father about the issue and begged to know where we were, but he merely said we were off partying and would come home eventually. The cloak and dagger was too much for her finally and she left, to return to a much reduced family Christmas. Once the patriarch removed his support, the rest of the family followed suit.

When the cousin left and Silvio and I returned to the house, the entire family discussed what had happened and how they felt about it. I was most touched by the way they all felt terrible that I’d been treated in such an inhospitable way. Argentinian 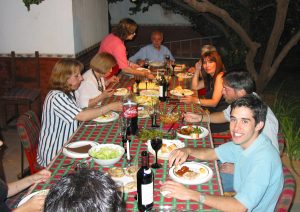 hospitality was more profound than I thought. They apologized frequently, said that I was family, and that I was always welcome in their house.

The cousin’s story with the family did not end there, for when she came to a family wedding a few years later they made their feelings known by placing her at a table with strangers. While they partied as a group she sat stiffly at her table, and when it was time for the family photos, they put off the photographer by saying they could do it later. Finally, the wine had worked its magic and the cousin went to the bathroom. Then they rallied the photographer to hurry, and they took several family portraits. Once she was back, they settled into drinking, only to rush again when she went to the bathroom. Doubtless this was more than confusing for the photographer, this hot and cold in terms of eagerness, but the end result was dozens of family wedding photos without her in them. The family had made their feelings clear.

I had an English teacher in high school many years ago who talked about writing as something that people do, rather than something that died with Shakespeare. I began writing soon after, maudlin poetry followed by short prose pieces, but finally, after years of academic training, I learned something about the magic of the manipulated word.
View all posts by Barry Pomeroy →
This entry was posted in Christmas, Culture, Travel and tagged Argentina, Christmas, Silvio. Bookmark the permalink.