Narcissism and Greed in Christoph and Wolfgang Lauenstein’s Balance

Perhaps one of the clearest

exhibitions of narcissism is the breakdown in cooperation of the characters in Christoph and Wolfgang Lauenstein’s Balance. In the film, five men live on the world of a smooth metal plate which they must keep balanced in order that they all do not slide off. They each must move in a coordinated way in order that the plate does not tip too far. That careful balance is upset when one of them fishes a large box from over the 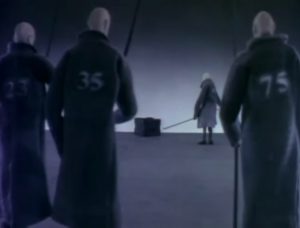 side of the plate.

In order to balance the plate with the heavy box added to their world, the rest must move to the other side of the plate. This enables the one who found the box to turn the handle and listen to the muffled sounds of music. The others want to hear this for themselves, so they unbalance the plate so that the box slides toward them and the original listener must step away from it so they all survive. 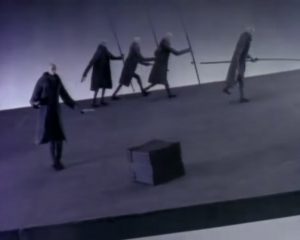 With this system, they could each get some time with the box while the rest keep the plate balanced. One of them decides to keep the box for himself, however, and refusing to share, he sits on while the box and he slide and the others struggle to keep the balance of the society.

As the box slides out of control, 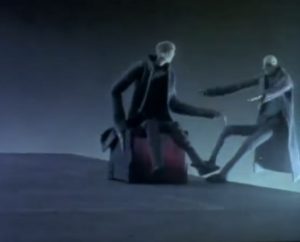 he shows no remorse as he pushes first one and then another of his fellows off the side of the plate. They fall into the abyss, the plate is further destabilized, and then he must push another in order to keep possession of the box. That continues until only he and the box remain. For balance to be maintained, however, he must stand on the opposite corner from the 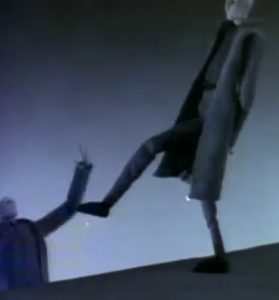 box. Therefore, he has killed his fellows for nothing. He can neither enjoy the music box nor move around on the plate to fetch other tempting treats from the depths.

The lesson is not lost on the Lauenstein’s viewing audience. If the man would have been content to share, all would have had a chance to listen to the music. Because of his greed and selfishness, he has lost what

he most desired as well as his friends who would have helped him. The film ends with him alone facing the box which is too far away to reach or hear, and he cannot move for fear of either losing the box of plunging himself into the depths.

I had an English teacher in high school many years ago who talked about writing as something that people do, rather than something that died with Shakespeare. I began writing soon after, maudlin poetry followed by short prose pieces, but finally, after years of academic training, I learned something about the magic of the manipulated word.
View all posts by Barry Pomeroy →
This entry was posted in Education, Solitude and tagged Christoph and Wolfgang Lauenstein Balance, greed, Narcissism. Bookmark the permalink.